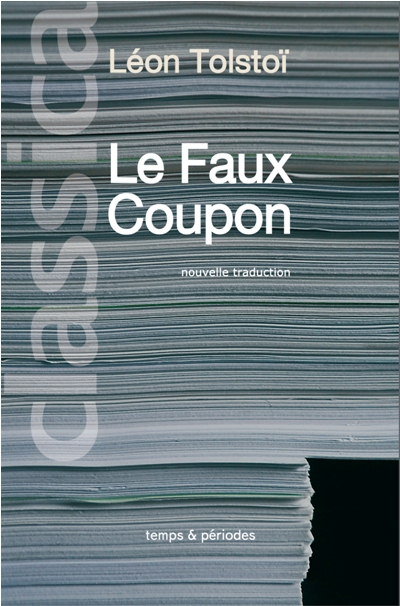 The Counterfeit Bill is a small gem by the great Russian novelist. First published as part of Tolstoy’s posthumous works in 1911, this text is based on a core philosophical premise that is strikingly relevant in the context of globalisation. Tolstoy depicts subtle and often unseen links that spread from the material word to the realm of the spirit, and points at everyone’s individual responsibility not only for one’s choices, but also for each of their consequences, which, no matter how insignificant at first, gradually, step by step, acquire frightening dimensions. Scientists are debating to know if a flutter of a butterfly’s wings may change the course of events at the opposite end of the planet. Tolstoy seems to have found the answer to this question long ago.

Short scenes replace each other in rapid succession, following the journey of a counterfeit bill as it goes from hand to hand. The story tells the origins of the fraud, the avalanche of evil that follows, and how the vicious circle is eventually broken. This kaleidoscopic construction of successive tableaux illustrates three ethical themes: the responsibility of man for every one of his acts and their consequences, intuitive love of the Other as a basis for morals, and the non-resistance to evil as an essential element of good.

An atypical text, with a structure that is not to be found in Tolstoy's other works. Beside its powerful philosophical message, its style is a fascinating experiment which prefigures the explorations of literary modernism.

‘The French translation of The Counterfeit Bill by J.W. Bienstock, done at the beginning of the twentieth century and reprinted by Ombres Editions in 1998 is written in a language that is conspicuously unidiomatic and constrained. That translation is of course not devoid of qualities, but if one adopts a very high standard, which I believe one must do when Tolstoi is concerned, this translation does not do justice to The Counterfeit Bill. Especially if one keeps in mind that this text was particularly dear to Tolstoi, who had worked on it, intermittently, over nearly ten years.’