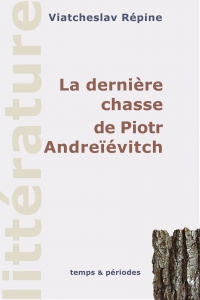 The last hunting outing of  Pyotr Andreyevich, was eventually published in Russia at the end of the 90s in several thick literary journals, and noticed by the critics for its ‘touchy’ subject.

Vyacheslav Repin, 54 years old, of Russian extraction, has lived in France for over twenty years. He has written novels, short stories and philosophical essays, and stands out among the writers of his generation by his deep attachment to the classical texts of Russian literature, and by his endeavour to re-invent a meaningful modernity. Having chosen France as his second homeland and second culture entitles him to a special place. His writing choices (he writes in both languages) and his thought (he positions himself as a ‘bridge between the world of East and the world of West’) make him an author beyond the norm. His works tactfully but uncompromisingly expose the aberrations of our time, and shed light on the distress which the responsible artist has to overcome nowadays.