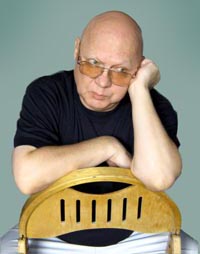 Valery Piskunov was born in 1949. He lives in the Russian province in Rostov-on-Don, far from the vain agitation of Moscow literary salons. A writer who has acquired a select readership and whose talent is undoubtedly recognised in Russia, but overlooked by the literary and media establishment. He has published both novels and short stories...

The first book by Valery Piskunov was published in 1973 by Rosizdat State Publishing, which later also published some of his fantastic and poetic works: Helios Seeks Planet (1977), Beat the Void (1981), Here We Have Landed (1987), Doves in a Suitcase (1990). The literary journal Novyi Mir has published his novels What Kind of Soul Exactly Would You Like? (1991) and It’s Your Choice (1994) [Vol’nomu volia], whose French translation was published in 2008 by Temps&Périodes under the title Diary of a Mercenary. Short stories published by the journal Znamia include The Number of the Beast (1990), Myths of the Beshtu Hill (1997), Feeding the Dragon (1996), and several others.

V. Piskunov about himself

‘I was born in Northern Caucasus, in a town that is little known in the wider world, but that is famous in Russia was its mineral water: Kislovodsk. Alexander Solzhenitsin was born in the house next door. Later, I have lived in Georgievsk, where Solzhenitsin, too, has lived, then in Piatigorsk, a thermal town in the Stavropol region, and finally in Rostov-na-Donu, where I still live now.
My first books were published in Rostov-na-Donu, by a local publisher, then in Moscow, by the literary journal Novyi Mir. By the early 90s I had become one of the regular contributors to that major literary journal, the most prestigious in Russia at that time. Later our collaboration came to an end, my connection with Novyi Mir broke. My novel The Gospel of Mary had been announced for publication, but only the first chapters were published. The editorial board also changed the novel’s title, which did not appear politically correct enough to them. I feel no rancour towards the new editors, as I had sensed quite early that the spirit of my work was rather at odds with the new editorial policy – which was of Christian-liberal tendency, as it were. Needless to say that Moscow literary critics were no longer very keen to mention my name. As a result, my literary biography is not particularly rich in sensational events of a certain kind, nor have many newspaper articles been devoted to my person.’

The language of Valery Piskunov has the powerful verve of classical Russian literature. His style is sober and sharp, carefully weighted and perceptive. His text is an impartial and scrupulous witness that registers events one by one. His challenging writing faces us with a new image of a familiar world, depicted through a multitude of facets, sometimes naïve, sometimes ironic, but invariably striking.

Valery Piskunov, about  The Diary of a Mercenary, February 2008

‘I have agreed for my writing to be made known to the French reader in order to tell him this: do not judge Russian literature by the measure of Moscovite salons. In the metaphor I develop in this novel, the perceptive reader will not only see the Caucasian war and the fate of a volunteer soldier, but he will see that the tradition of Pushkin, Tolstoi, Chekhov endures, that it is alive. This tradition does not play the fashion’s tune, it flees empty social “projects”, it continues to create its own world. A knight without fear and reproach. As always, at one’s own peril...'