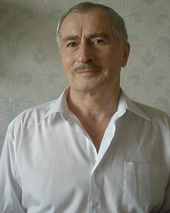 Former literature teacher in Groznyi, then soldier, Akhmed Kelimatov now lives in Moscow.
A Chechen intellectual, former teacher of Russian language and literature, now retired, Akhmed Kelimatov fled to Moscow with the few remaining members of his family after the blind retaliation and the massacres that took place in Groznyi. A traditionalist Muslim and a patriot, he adheres to the ancestral values of Islam, which are, in Chechnya, much more democratic than one may imagine. The woman, notably, stands unexpectedly high in the Chechen social hierarchy. She is highly respected, her wise advice is sought after, and her infallible intuition revered. A society that is much modern than what one might expect.

Akhmed Kelimatov, was born in 1944 in Kazakhstan, to a Chechen family that had been deported under Stalin, at the time of World War Two. A staunch adept of the Islamic faith, former teacher of Russian literature in Groznyi and sometime colonel of the Russian special services, now retired. He is the author of several books on war in the Northern Caucasus region, which tell of his experiences as commander of a militia regiment, essentially comprised of Chechens. Together with his regiment, Kelimatov has fought against the troops of General Dudaev, the self-proclaimed president of Chechnya during the first Chechnya war. He was wounded and added to the ‘black list’ of Maskhadov’s intervention groups that entered Groznyi to ‘clean’ the city after it had been left by Russian federal troops. He had to flee from his fatherland by night, under bombing, with his close family members hidden in the trunk of his car, and succeeded by miracle in taking one of the last military planes taking off from Mozdok for Moscow. He currently lives and works in Moscow, where he is a consultant for various anti-terrorist organisations.

“Some time ago, just before returning to Moscow from a stay in Chechnya, I made a short trip to the place where once stood my house and to pay a visit to the tombs of my kin.
On the way back, at the Chechen border post near Mozdok, a young lieutenant of the federal forces came up to my car’s door and asked: “Have you reported your presence to the commander’s office during your stay in Chechnya?” A shiver went down my body. The space of a second I imagined myself a man without a homeland.
I answered him with another question: “What about you? Did you ask anyone’s permission to come to Chechnya?”
The young lieutenant was speechless. For the fraction of a second we were looking right into each other’s eyes; we had understood each other.”